4.9 mm foundations on the European market have wrong dimensions

Attention!
ALL foundations of 4.9 mm dimensions which are sold in Germany or elsewhere in Europe (except for the company in Sweden), have the mentioned error.
-> List of the foundation available in the european market.

And be careful with “bio wax”. This is very frequently from Africa (which has a peculiar smell), and as the wax there has a higher price than the honey, wild swarms just to get burned to gain the wax. Unbelievable, and is then offered as a bio!

Once we’re at it – here you can see how you can make your own silicone moulds.

There is arrising a very serious problem

Apparently, most beekeepers in Europe, who have worked with small cells, did not use small cells at all.

Udo from Cologne has ordered from the company Muhr new 4,9mm foundation and has measured as follows: 53mmx50mmx50mm

I have also requested foundations from various suppliers some years ago and measured similar patterns.

The only alternative in Europe to get 4.9 mm foundations with the correct dimensions is at the moment the company in Sweden.

Adriano from Italy made a wax residue testing and it fluvalinate could only be detected in very low concentration . It is lower than the lower limit, which is displayed in a Hohenheim investigation.

When we speak of small cells, then we talk about the system of Dee Lusby and only about that. She recognized 25 years ago, through intensive study of ancient beekeeping literature, that we keep our bees, for 100 years, on too large cells . Her system is based on the fact that we use cell sizes below 4.9 mm and also make all the other changes she has made to get disease resistant bees.

And if we assume that the measure of cells used by the german beekeepers who allegedly worked with small cells, were about 5.05 mm, we can say, that this only represents the first step. At 5.05 mm, in Ed and Dee Lusby’s hives the Varroa problem improved and tracheal mite problem disappeared. But the rest of diseases significantly reduced their hives. After they had switched to 4.9 mm, these diseases disappeared and remained below the 2% threshold.

In addition, I found that it was easy for almost all the hives to build the 5.1 mm foundation. But at 4.9 mm, it was just one of hundred that did it at the beginning. That was without the help of the plastic combs, with which it goes much faster.

Our cell measures are now from 4.8 to 4.85 mm. We achieve this by taking the foundations still very warm from the mould, which makes them shrink slightly.

How do you measure the size of the cells?

The agreement of measuring cells is to measures 10 cells from mid-wall to mid-wall and divide the result by the factor 10. You have to make it in all three directions, which are caused by the shape of the hexagon. All three sizes must be less than 4.9 mm. 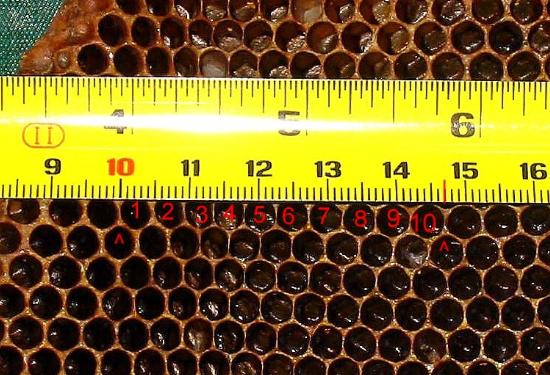 I must again repeat that I do not want to persuade anyone to use small cells. It’s no use, if you omit all the others. I only want to show that there is a (among many) way to get disease resistant bees.
Ed and Dee Lusby (Ed was the Dee’s husband, he sadly passed away recently, Dee sais because of too much stress – I can feel it) started to convert their 1000 colonies to the 5.05mm cell size in the 80s, after intensive study of ancient beekeeping literature. As they work with 4 to 5 boxes the whole year long, they had to change 40.000 frames. Unbelievable! For 2 people! They were so convinced of what they had found in the literature and believed the cells in use were too large for the bees. They had no mould to make the foundations, and were able to convince the owner of the company Dadant who made them a roll of steel, engraved by hand! Pure adventure.

When they had their bees at 5.05 mm, the problem with the Varroa and tracheal mite suddenly disappeared, but other illnesses kept decimating the remaining colonies. They decided to change everything again, now to 4.9 mm and behold, the disease disappeared. And it remained this way until today. Dee now has again nearly 1,000 colonies, without any treatment since over 25 years.

And I have to repeat that it is not just the size of the cell, but many other factors that need to be changed, although without changing the cell size, it is not possible.

This means that one and a half tenths of a millimeter helped the bees to defend themselves against the disease.Everything after remained below the 2% threshold.

And now in germany reportedly hundreds of hives have been set on 4,9mm small cells and have not shown the desired results. And now I ask myself, why nobody has taken a measure tape and has accurately measured the cell dimensions?

Dee Lusby emphatically describes several times on her website that the cell size must be below 4.9 mm in all three directions if you want to apply their small cell beekeeping system with success.

I want to mention briefly a comparison.
Last week the gearboxes of my old Land Rover went on strike. I took it apart and saw that the bearings were worn. Now I needed new ones and measured it. Since I needed a bearing with 119.73 mm outer diameter. This is old English inch scale. They had one with a diameter of 120mm, but that did not help me.
The same is the case if we use in the system of Dee Lusby too large cell size.

Now back to the conventional foundations on the market.

Take a pocket rule and measure 10 cells on your foundations in 3 directions,.

And, amazingly, the cells are longer on one side on all commercially available foundations, even the  foundation moulds.

Because the foundations are made with a roller and the wax is elongated in the direction of the rotation. And the foundation moulds are also made from these foundations.So we have errors of up to three tenth or more difference in cell size throughout ALL our hives.And at 0.15 mm Dee was at the point when the diseases disappeared.It seems to me as if it was a big stress factor for the bees otherwise why they have the hexagonal cell? Because it is accurate and divides space best.

A request to those who work with small cells here. Please measure your fondations and give us your report here of the 3 dimensions.

Collection of molds built with matrices from ResistantBees