Home importantvarious There used to be 100 different mite species in the bee hive that lived together without any problems – what can we learn from that?
various

There used to be 100 different mite species in the bee hive that lived together without any problems – what can we learn from that?

What do the more than 100 different types of mites have a relationship with the bees, including the Varroa mite and the tracheal mite? 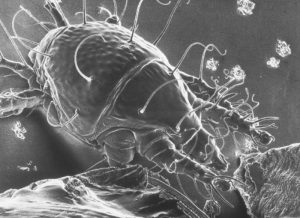 This is for Marshall and others here since just gotta post this and stir
the pot now since the USDA mite survey with me I am considering they are
burying…………….!!!!Honeybees ALONE are associated, directly and indirectly with a hundred or
more different mite species although most of these mites appear to be
natural predators of other mites that live with bees (none of which attack Varroa
mites). Also some of the symbiotic associations are commensalistic while
others are parasitic. and this was published with Griffiths et
al….1983…Varroa–The acarologtists’ view,….and cited by Cavallora, 1983…Varroa
jacobsoni Oud. Affecting Honey bees: Present Status and Needs. A. A.
Balkema, Rotterdam. p107Now to clarify more, though here might be stirring more:Two organisms living together in a close association with at least one of
them benefiting from the association are said to have a symbiotic
relationship. Examples of types of symbiotic relationships are mutualism, in which
both organisms benefit from one another; commensalism, in which one
organism benefits and the other neither benefits nor is harmed; and parasitism, in
which one organism benefits while the other is harmed. In a parasitic
association the parasite is usually referred to as the symbiont while the
organism being parasitized is generally called the host.Parasites are considered to be efficient parsites (as pointed out by
Southwick, 1988) when they approach a commensalistic existence, i.e. , when they
do not seriously harm their host. A parasite’s host is likewise an
efficient host if it does not strongly react to it’s parasite. Thus through long
period of time, if the populations are allowed to live together under natural
conditions, the parasite and the host population may adjust to one
another, and the parasitic symbiosis becomes more commensalistic. At one point
during these long-term adjustments, there usually becomes a thin line of
distinction between parasitism and commensalism , and the two organisms has less
difficulty in coexisting.So here to me this is like ticks grooming hairs on ALL KNOWN livestock,
including honeybees, which trachael mites did prior to upsizing being called
then VAGANS, and varroa mites did prior to upsizing being called head neck
and back mites pre-1917 times…….which I have gone over and over here,
again and again for noting…………..

———————————————
Now for more pot stirring: commensalism with two organisms co-existing
living/working together could be …..(hehehe/lol) man then keeping honeybees
for pollen, propolis, honey getting……………..

Parasitism with two organisms co-existing living/working together could be
……(hehehe/lol) man enlarging honeybees artificially for slide of hand
tricks for stealing all honey/pollen and propolis he can, while feeding back
artificial feeds of HFCS, sugar and artiticial pollen, and treatments
(offset the propolis taking too)…which can keep bees alive, though not very
healthy and needing constant overseeing to keep going.

Anyway,………………food for thought here ….for man to keep
evolution going with healthy food, we do have to co-exist with honeybees and work
them properly……..

Now continuing more: if 100+ mites have been previously said to be
associated with honeybees, then if only trachael mites and varroa mites are
effecting them due to upsizing, they are pretty much ALL good mites, and size
back down, then even trachael mites revert back to VAGANS and varroa mites then
revert back, to head, neck and back mites….. and all no
problems…………….leaving man,… the parasite then for $$$ wanting/doings in our
world of agric, which needs clean organic healthy food for evolution to go
forward for humans besides all plants and animals, and much cleaning up now
to get the chemicals/pesticides, herbicides, bacterialcides, etc out of our
food chain, and water for then humans being healthy too!.besides all other
life on earth…

Beekeeping on the Fringe, with Ed & Dee Lusby

foraging flowers in the north of the island...