Between 2011 and 2013, in laboratory cage tests, we compared life spans of bees reared in colonies kept on small-cell combs (cell width of 4.93 mm) that were either treated or untreated against varroatosis, as well as life spans of bees reared in colonies kept on standard-cell combs (cell width of 5.56 mm), both treated and untreated against varroatosis. Maintaining colonies on small-cell combs, combined with the lack of strong parasitic pressure from V. destructor, extended the life span of these bees in comparison with that of bees from standard-cell combs.The keeping of colonies on small-cell combs increased the longevity of bees reared on them and heavily infested by the parasites. Intensive infestation by V. destructor mites shortened the life span of bees, regardless of comb cell width, as confirmed by significant correlation coefficients between the parameters defining the scale of infestation and the life span of bees, while the specifics of the interrelation between the worker life span and the scale of infestation depended on the cell width (small/standard). Hence, comb cell width affects the biology of both the parasite and the host, as well as the relationship between them. Therefore, analysing biological connections between A. mellifera colonies and V. destructor in the context of different comb cell widths seems a very promising direction for research.

Bee comb cells in the nests of bees raised in Europe today are wider than in original, natural nests. This results from the invention of the comb foundation and the introduction of the frame hive with a dismount- able nest at the turn of the 19th century (9), associated with the enlargement and standardisation of comb cell width. The currently applied, so-called standard, comb cell width (in standard cells) ranges from 5.40 mm to 5.50 mm (7, 9), whereas the width of bee comb cells in natural nests of the Northern European dark bee ranged from 4.90 mm to 5.10 mm (Cowan 1904 following 9). The latter cells are defined as small cells (9). To date, little attention has been devoted to explain- ing how the change in cell width affected biologically important traits of bee colonies, which had developed over thousands of years of evolution.

Worker life spans are of key significance for such functional traits as the strength and survival rate of colonies. Increased life spans can be accompanied by growing honey yields, since the longer bees live,the more nectar foraging flights they can perform (3, 8, 25). On the other hand (8), short worker life spans can improve the health of the colony, as the compensation in the form of a quick generational replacement prevents diseases. Fluri (4) reports that the worker life span is affected in 80% by environmental conditions, the remaining 20% being determined by hereditary factors. This is in line with calculations by Rinderer et al. (17), who estimated the heritability coefficient for this trait at h2 = 0.23. This shows that studies of the influence of comb cell width, as an intra-colony environmental factor (23, 24), on the bee life span are particularly important.
Laboratory cage tests have been used to assess important bee traits for over 30 years (10). They make it possible to analyse exactly the genetic background of various traits through standardisation and a partial elimination of the influence of changeable environmental conditions. Such tests have been used to assess the efficiency of food intake and storage, worker life spans (2, 10, 11, 12, 14, 15), and intergenotypic worker interactions connected with the hoarding behavior (1).

Laboratory tests have also been applied to investigate the effect of pesticides (26), drugs and food supplements on bees (16, 21, 22).
In this study, by means of laboratory cage tests, we examined the life spans of bees reared in small- and standard-cell combs, both in (highly infested) colonies treated and untreated against varroatosis for the last three years. We assumed that the untreated colonies were under a strong selection pressure from V. destructor mites.

In 2011, we compared the life spans of bees reared in colonies kept on small-cell combs and untreated against varroatosis (SM-UT) with the life spans of bees from colonies kept on standard-cell combs. treated (ST-T) and untreated (ST-UT) against varroatosis. The ST-T colonies were treated with Biowar 500, applying 2 strips of 500 mg Amitraz in each strip per colony from the beginning of August until the end of October. The SM-UT group consisted of 5 colonies. These were survivors from 16 colonies that had been transferred onto small-cell combs as early as 2008, and at the same time ceased to be treated against varroatosis. In the absence of such treatment, these colonies underwent natural selection (selection intensity of 5/16). The ST-T group comprised 10 colonies and the ST-UT group was made up of 5 colonies. The treatment of the ST-UT colonies was discontinued in 2009. The queens in the ST-T and ST-UT colonies were naturally mated sisters and descended from a queen representing a varroatosis untreated colony. The SM-UT queens descended from the same baseline population as ST-T and ST-UT, though from an untreated colony.

In 2012, we compared the life spans of bees reared in 10 SM-UT and 10 ST-T colonies formed of nuclei created in 2011. The SM-UT nuclei were provided with naturally mated daughter-queens reared from larvae drafted from two SM-UT colonies that had been the fastest to develop in spring and produced the largest amounts of honey. It was assumed that these two colonies were best adapted to sub- sisting on small-cell combs. The ST-T queens were sisters descended from the same mother queen as the ST-T queens in 2011. The same procedure as with the SM-UT and ST-T colonies, was applied to the ST-UT colonies. None of the ST-UT colonies survived the 2011/2012 overwintering.

In 2013, we compared the life spans of the bees in the SM-T and ST-T colonies to determine the effect of comb cell width on the longevity of bees in the colonies treated against varroatosis. Both of these groups comprised 10 colonies formed in 2012 on the basis of nuclei provided with natu- rally mated sister queens raised from larvae that had been drafted from a colony treated with an anti-varroatosis agent.
Each year, one-day-old worker bees from each colony of each group were collected using screen comb-cages, and after 24 hours introduced into 2 wooden cages, each containing 40 bees per colony, according to the methodology of Strachecka et al. (22). Next, every other day, dead bees were removed from each cage and counted. Bee life span distribution quartiles were adopted as a measure of apian longevity. It was determined on the basis of the number of days elapsed from the beginning of the test until the day on which 75%, 50% and 25% workers survived. In the colo- nies from which the one-day-old workers were collected, we determined how many brood cells were infested with V. destructor in May and June of 2011 and 2012. In May, we counted mature V. destructor females (brown cuticle hue) in the debris obtained with bottom-board drawers (5,20) and computed their mean numbers per 24 h.

Tab. 2. Spearman rank correlation coefficients computed for the worker life span and characteristics of colony infestation by V. destructor in years 2011 and 2012 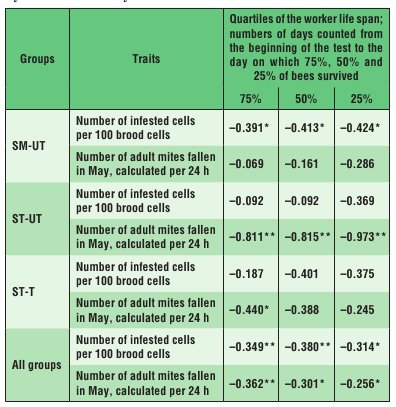 Longer life spans of the bees from the SM-T colonies in comparison with the ST-T colonies show that, in the absence of a strong pressure from V. destructor (Fig. 1, year 2013), the keeping of colonies on small-cell combs increases the longevity of bees reared on them. This is confirmed by the results for 2012, when the bees from the SM-UT colonies, exposed to a strong parasite pressure, lived as long as those from the treated colonies (ST-T). We make this assumption, since De Jong and De Jong (6) and Schneider and Drescher (19) demonstrated that increased bee colony infestation by V. destructor shortens worker life spans.

Our yet unpublished observations, compared with the results of this paper, lead to the conclusion that the longer life spans of bees from the SM-T colonies, determined in laboratory cage tests (Fig. 1, year 2013), corresponded with a greater strength of those colonies during the overwintering period and in early spring, in comparison with the ST-T colonies. The exact identification of the connections between the life span, the keeping of bees on small-cell combs and colony strength requires further studies. Apart from cell width, the apian life span is, most probably, also significantly affected by other intra-colony habitat factors (4, 17). 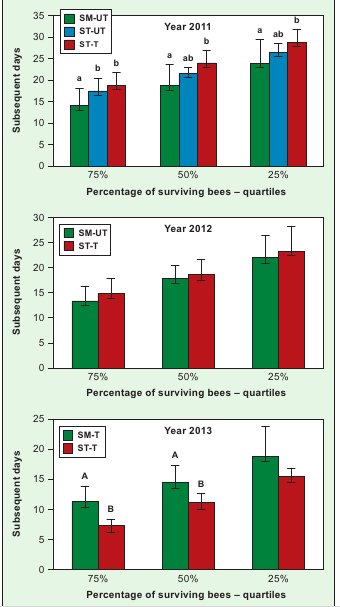 As expected (4, 19), strong infestation of the colonies by V. destructor mites reduced the apian life span, regardless of the cell width, as confirmed by significant negative coefficients of correlation between the parameters defining the scale of infestation and the life span (Tab. 1). The life-span reduction was greater in bees reared on small combs. The fact that, despite a similar scale of infestation of the SM-UT and ST-UT colonies by V. destructor (Tab. 1), the life span of bees reared in the SM-UT colonies was negatively correlated with the brood infestation rate, whereas the life span of the ST-UT bees was negatively correlated with the number of the parasite females fallen into debris within 24 hours (Tab. 2), suggests that the character of correlation between the worker life span and the infestation rate in colonies kept on small-cell combs is different from that in colonies kept on large-cell combs. Hence, the comb cell width affects the biology of both the parasite and the host, as well as the relationship between them (13).The worker life span can be significantly influenced both by the comb cell width (small or standard), which is regarded as an internal factor of the bee nest habi-tat (23, 24), and by the pressure from V. destructor. The rearing of workers on small-cell combs seems to lengthen their lifespan. Therefore, analysing biological connections between A. mellifera colonies and V. de-structor mites in the context of different combs cell widths seems a very promising direction for further research.

Resistant bees in american Arnot forest are much...