The above list is some of the things I learned from John Harbo when he was lecturing in Sweden recently. That VSH trait is governed by two pairs of genes is a working hypothesis that is contributed by breeding tests. No observation contradict this.

This makes the VSH-trait to something different compared to the hygienic trait keeping bee colonies free from American foul brood and chalk brood. This later hygienic trait is most often tested checking how fast bees clean out freeze killed brood (or pin killed). The working hypothesis is here that the trait is goverend by three gene pairs and this hygienic trait is contributed by recessive alleles (gene variants), which makes it necessary that individual worker bees have all six alleles to show the trait. I have understood that the more individual bees in a bee colony that have all six alleles the more effective is the colony in this hygienic trait.

But with VSH you can for example have a queen with two alleles that are mated to drones with two alleles. Thus the virgins from such a colony always will have two alleles. Those virgins can mate to any kind of drone, with or without VSH-alleles, and still show the VSH-trait – AND be Varroa resistant.

On the other hand it is not necessary that all individual bees in a bee colony have two VSH-alleles for the whole colony to be Varroa resistant. It is unclear how many are needed. But in a test where a resistant colony and a non-resistant were combined – the combined colony was resistant. This means that you don’t have to use an inbred breeder colony with all four alleles to produce varroa resistant bee colonies. If your breeder colonies have a high VSH-value and you open mate the daughters in an area dominated by drones from colonies with high VSH-index it’s good chance the queens produced will give Varroa resistant colonies, if not reinvaded heavily by mites…

You can test your bee colonies for the VSH-trait and breed from the best and with a good strategy develop the Varroa resistance in your bee stock, even if you don’t use instrumental insemination. But if you do, you can develop a strain quicker with higher number of alleles.

All bee stocks have the VSH trait, at least at a low degree. The alleles are there, but spread out in the population. Not concentrated enough in the bees in a non-selected stock. Also mites get old and stop reproducing. So “background noise” of non reproductive (infertile) mites in a colony is about 10%. Maybe even up to 25%. If an individual bee have one VSH allele the VSH trait doesn’t show up in that bee. I think that’s the info I got.

After retirement John Harbo bought queens from Glenn Apiaries in California to start his own bee business. He continued breeding VSH bees and he doesn’t treat his bees against the Varroa mite. He doesn’t need to. He is now running his bee business together with his wife Carol. 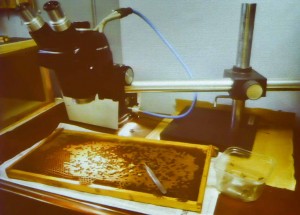 Harbo explained a simple test every beekeeper can and every bee breeder should do. He uses a microscope with 0.5 magnification of the eyepiece. Thus getting maybe about a total of 5x magnification. The working distance under the microscope need to be about 10 centimeters  (4 inches). 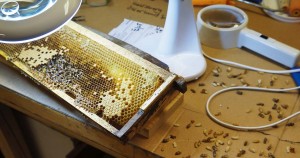 I use a reading magnification lense for elderly people with a ring lamp (much cheaper), plus reading glasses (2.5x). 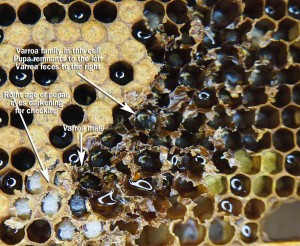 (Click on the picture to enlarge it and on back arrow up to the left to come back to the text.) When the pupae are at least 4 days old and the eyes are getting dark is the best time to check them. With tweezers around the head (or somewhat further down) you pull out the pupa, look at the pupa for mites and mite feces (mites that don’t reproduce often put there feces on the pupa instead of 10 or 2 o’clock closer to the bottom of the cell but on the cell wall. You then look in the cell for mites and mite feces. Often you see white remnants of the pupa on the bottom of the cell. The mite feces are somewhat whiter than pupa remnants and more up on the cell wall, but still close to the bottom.

What I saw when I did my first test was that mites with good reproduction and whole varroa families, those mites were very active and ran around on the bottom. Mites with  just one type or very few offspring moved slowly in comparison. Which also did the mother mites with no offspring, that didn’t reproduce. The mite feces amount in such cells with no reproduction seemed to be smaller.

If 25% would be the best I could come up with I would personally use it anyway as a breeder if it is a good colony in other respects. I would also consider the possibilitty to increase other efforts of enchancing the Varroa resistance in my stock.

Why did I test the colony I did test as the first one of mine? Because it showed very little signs of varroa present. It is very good in other traits. It didn’t need Varroa treatment when neighboring colonies did. It showed  8 pupae with mites out of 110. 2 had whole Varroa families, 1 had just a male offspring. 1 had only two female daughters. The rest no offspring. This makes 50% VSH. Time will tell how resistant the colony is. It’s on small cells as well.

The VSH test is so easy and so valuable, that every bee breeder should tell the customers what VSH value their breeders have. And every queen customer should ask for it.