Survivor bee colony found, 7 years without treatment and the importance of drones

Seven years ago an organic farmer on our island asked me for small cell foundation for a swarm he caught. He never had bees before and knows nothing about bees. So he put this swarm in a box with 4,9mm foundation and some time later he put a queen excluder on top and a second box. He never treated this hive and never opened the brood box of this hive. Every year he extracted some honey from the second box  and this is all what he did in these seven years. And this hive is doing well. Now he found a swarm hanging on a tree next by and he called me what to do. I explained him that this is very special because a lot of hives around are dying, though treated with all kind of chemicals against Varroa mites and this hive on small cells is doing well. So he consented that I take the swarm to multiply it. In return I gave him a good hive of my small cell bees.

When I went to get the swarm I saw the original survivor hive. I did not open it because he never opened the brood box and I did not want to interfere. But in front of the hive I saw all what I wanted to see. On the bottom before the hive there was a big amount of cleaned out drone brood in all stages. Some with deformed wings. That proves that this hive is cleaning out the infested drone brood cells like we have seen in our survivor hives. 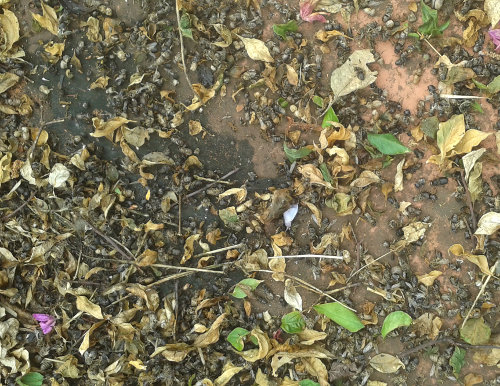 chewed out drone brood in front of the survivor hive.
click on the image to enlarge

This again shows the importance of correct and consistent number of drones in the small cell hives. They are the true heroes and protect the worker bee brood from infection.