Startseite » discovered a new good behavior of the bees for Varroa control
how does it work?own experiences on Varroa-resistant, small cell beesthe importance of the dronespopular

discovered a new good behavior of the bees for Varroa control

What mechanisms do the small cell bees apply to defend themselves, without our help, against the Varroa mites?

This is a very important question and we are getting close to be able to answer it.

Last year at the same time, we made very interesting findings obtained by the study of our small cell hives for VSH (Varroa Sensitive Hygiene):

I now have investigated 3 survivor hives (mid-February 2015). These are hives who never had been treated against Varroa mites and defended themselves with their own efforts. The queens were never replaced.
And in addition I have examined a hive that had Varroa problems last year and in November I replaced the queen with a selected one.

Hive N° 83sa
The hive went on 4 supers over the winter with a lot of food reserves.
On 12.2. it has a full super with brood, has good drone brood, you see some BH (hygienic behavior) in the bee brood and also BH in the drone brood, which is a very good behavior. 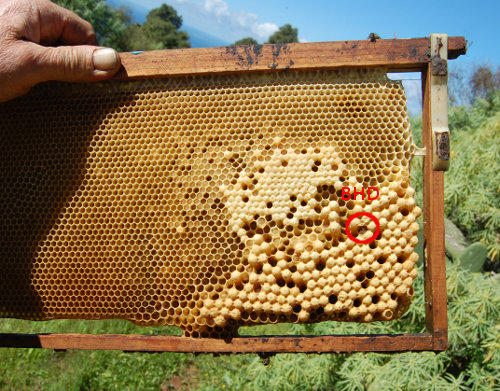 Here in the picture below you can even see  the Varroa mites which were in the chewed out drone cell: 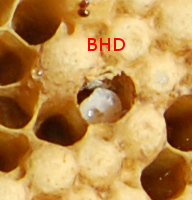 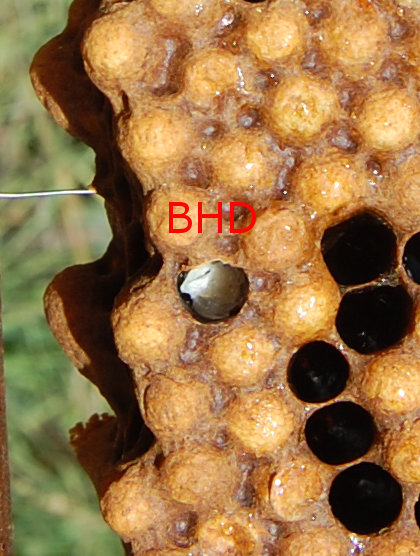 which means that in the 119 worker bee brood cells 15 Varroa mites were found with only 7 female offspring.

Now I opened 60 drone brood cells and found in 32 cells no Varroa mite and in the remaining 28 the following: 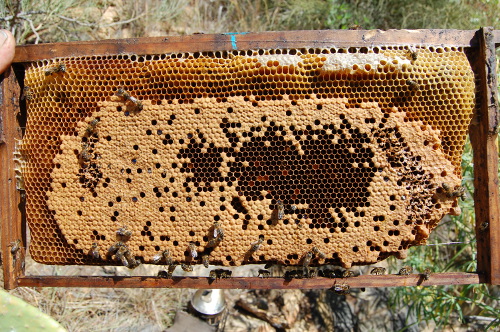 The colony went on 3 supers over the winter with a lot of food reserves.
On 17.2. it has a full super with brood, made drone brood, there is good BH (hygienic behavior) to be seen in the worker brood and BH  also in the drone brood, which is a very good behavior. The colony is a little nervous (already last year). 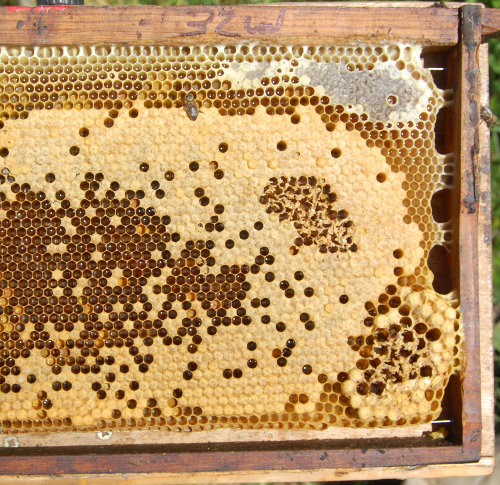 in 17 from 19 drone brood cells there were Varroa mites.

Summary:
In this colony, the mites focus on the drone brood and in the worker bee brood I saw some chewed out cells. Almost every drone brood cell exhibited multiple occupation with mites, but they could not produce more offspring than mother mites were there. But on this comb there were only about 80 drone brood cells present, on which all the mites were distributed. Then I analyzed another brood comb on which much more drone brood was created, approximately 200 cells per comb. And there I found many unoccupied drone brood cells and those that were occupied, showed much less Varroa mites than on the first brood comb. This shows once again how important it is to teach the bees again to create the correct amount of drone brood on each comb. This colony is also a survivor colony and was never treated and never the queen was replaced. Apparently, the Varroa defense tactic of the bees is slightly different to the first colony.

This is now a breeder hive that went over winter with 3 supers and a lot of food reserves. You can see some BH.

In 25 opened worker brood cells I found no Varroa mite. 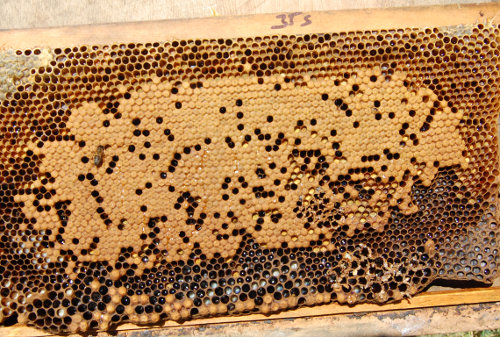 In 21 opened drone brood cells I found in 9 cells no Varroa mites and in the rest the following:

Summary:
In the worker bee brood Varroa mites are not visible. Those who are there, are resolved by the hygienic behavior.
In the drone brood you can be seen here again multiple occupations with few or no female offspring. Of the 32 mother mites only 15 female offspring can be seen. What is striking is that no female descendants are found in 4 drone brood cells and in 2 no males either. This colony defends excellently.

This colony went on 2 supers over the winter and had last year Varroa problems. It was never treated, but last November, the Queen was changed and a selected mature queen cell was given, after removing the old queen. The hive had a complete super of food available.

You can see some opened worker brood cells by the hygienic behavior BH and BH even in the drone brood: 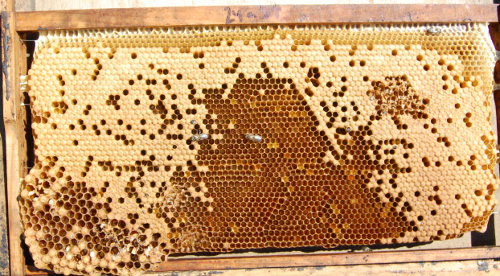 I opened 42 cells of worker brood and found the following:

Now the difference to the survivor colonies is clear.
Here the Varroa mites multiply in the bee brood progressive – in contrast to the previous colonies. In 42 cells of worker brood I found 8 Varroa mites with 15 female offspring.

Then I opened 17 drone brood cells and found the following:

I found in 9 drone brood cells no Varroa mite and in 8 I found 13 Varroa mites with 14 female offspring. This means that there we no longer observe multiple occupations with suppressed proliferation of mites, as we have seen in the other colonies. Nevertheless, the new genetics of the Queen seems to bring about some change. I have seen several open cells by the hygienic behavior in the worker bee brood and in the drone brood.

Result:
This study of the 3 survivor colonies shows us that the way how our small cell bees fight the Varroa mite differs from what is referred to as VSH.

It seems that the bees can activate a mechanism by triggering the Varroa mites to accumulate in some cells, although plenty of other cells would be available, where they could multiply much better. This distinguishes the survivor colonies from those who have problems with the Varroa mites. The smaller cell size is responsible for ensuring that the mites reside mainly in the drone brood. Thus, the drone brood, is a protective barrier for the brood. It is also apparent that ONLY  the reduction of the cells does not execute to the desired success. Since it takes a lot more, which fortunately Dee Lusby has learned us long ago.

This is the response of Dee Lusby to this latest test:
.
Stephen, this is great for seeing that with hives in harmony with Nature again with 85% worker and 10-15% drone things fall into balance for pest and parasite control and accompanying secondary diseases………which then again makes the drones our best defenders of our hives by overseeing and taking the hit to keep their ladies secure and healthy and ongoing, while they get kicked out and sacrifice their lives so doing…………..such wonderful male drones then…and hives finally working back in tandum with nature for evolution going on……………..