Startseite » How does our small cell bee defend herself against the Varroa mites?
how does it work?own experiences on Varroa-resistant, small cell bees

How does our small cell bee defend herself against the Varroa mites?

Investigations in our hives:

I’ll try to explain how our small cell bee treats the Varroa mites: 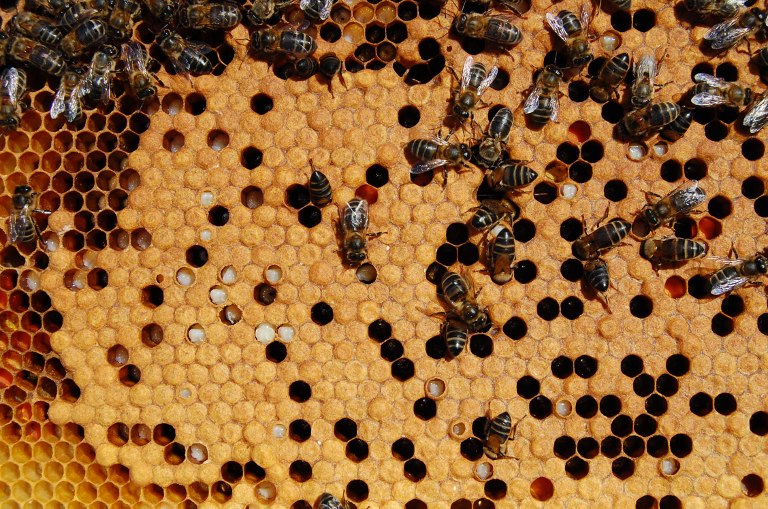 As I said within our small cell bees the varroa focuses on the drone brood throughout the summer, apparently in contrast to the previous experience with the large cell bees.
The Varroa comes from the Asian bee cerana, which also builds small cells, and there the mites have also always been focused on the drones. We brought the varroa to us and our bees have been artificially enlarged so that the Varroa confused them with the drone brood. Dee Lusby calls this the pseudo-drone effect.

Therefore the drone brood takes the burden of the mites throughout the summer, then in autumn and spring, when the bees have more time and there are no drones, they proceed to clean the cells of the mites. Then the varroa has to go to the brood nest, as the otherwise preferred drone brood ids not around at this stage. (in small cell bees, with large cell bees the story sounds different) Then they open those cells were there are mites. This commonly occurs when the larva has violet eyes, even in fairly advanced stage. We call it “bald headed brood”, and hygienic behavior or VSH, which is all the same…

On the photo you can see some already cleaned cells, some where the mites have been on the head and some where they already started to eat the larvae in order to reach the mites.

If we see something like this in our colonies, we can consider ourselves lucky.

If the mite is sitting at the head of the larva, it is removed and the bee does not die, but hatches normally. But if the mites are in the bottom of the cell, the bees have to eat their own brood. This can at times take on enormous proportions. And it is now visible how each colony that defends itself has to go through a crisis. What weakens it most is that it decimates itself. I can find also increasingly  bald headed brood amongst the drone brood, throughout the year.

Dee explained that the “hygienic behavior” has to do with the division of labor within the hive. If there are many bees they can subdivide the work better and also find it necessary to kick out the mites. This apparently requires a trigger, because at a certain stage it leaves them pretty untouched.

Taking in account that the small cell bees have a longer life span (8-12 weeks), it is clear that this hygienic behavior is more common in the small cell hives.

Now it is not so important how many varroa mites are in the hive. It depends on whether the bees defend themselves and how resistant they are to the virus of deformed wings DWV, which is an absolutely fatal disease. If during an inspection, at the beginning stage of the transition to small cells, we find more than 5 bees with deformed wings, we must act; otherwise the colony will soon be lost. Last year I made a good experience by simply replacing the Queen with a new Queen bred by certain criterias, I was able to solve the problem. But you can’t find that at the beginning. At first we had to do a shakedown on new foundations and then change the queens. This year it has stabilized even more in spite of some deformed bees the problematic hives were able to recover. For the selection and breeding of queens more later – this is enormously important.

As you all know, there are different ways the bee can fight against the varroa, VSH, SMR, etc, etc. Within our bees it is especially the baldheaded brood VSH, but one of our colleagues from the Nordic countries, who have a lot of experience with small cell bees, made a amazing discovery. This is just unbelievable – hygienic behavior at its best:

With the tweezers, one varroa is placed on the entrance board.

It is a Buckfast hive. This has recently become accustomed to the small cell size of 4.9mm and is now building well this new cell size. The hive is completely treatment-free and very vital. Also has his on own honey, no artificial food and is located in Bavaria.